STONEWALL JACKSON - Fear, and the Sovereignty of God

Psalm 56:9-13 (KJV), “When I cry unto thee, then shall mine enemies turn back: this I know; for God is for me. 10  In God will I praise his word: in the LORD will I praise his word. 11  In God have I put my trust: I will not be afraid what man can do unto me. 12  Thy vows are upon me, O God: I will render praises unto thee. 13  For thou hast delivered my soul from death: wilt not thou deliver my feet from falling, that I may walk before God in the light of the living?”

Psalm 27:1-3 (KJV), “The LORD is my light and my salvation; whom shall I fear? the LORD is the strength of my life; of whom shall I be afraid?  2  When the wicked, even mine enemies and my foes, came upon me to eat up my flesh, they stumbled and fell. 3  Though an host should encamp against me, my heart shall not fear: though war should rise against me, in this will I be confident.”

One of the great ways to win the battle over fear is to trust in the sovereignty of God.  If you’re living in fear people or circumstances are bigger and more influential to you than God, than your vision of God is too puny!

To any War Between the States enthusiast, no matter their interest level is familiar with the name “Stonewall” Jackson.  He was the great Confederate general during that War.  He was a strong Christian, with a rock-solid faith.  His name however was not “Stonewall”, but Thomas.  How did he get the nickname “Stonewall”?

Jackson had a strong, unshakable belief in the sovereignty of God, that God is always in control even when it seems the world around is falling apart.  At the first battle of Manassas (Bull Run), while shells and bullets were flying around, Jackson stayed on his horse and remained calm and collected, like nothing was going on.  Brigadier General Bernard Bee saw this and told his own troops “There stands Jackson like a stonewall.  Men, let’s determine to die here with him.”  After that battle Tom Jackson’s brigade became known as the Stonewall Brigade, and he would forever be known as “Stonewall” Jackson.

Jackson’s courage and composure really came out in this great battle.  During the heat of the battle a messenger came and handed Jackson a letter to sign.  He dismounted and when he did a cannon ball blew up a tree that was nearby.  Wood chips rained down on Jackson.  Without missing a step, he calmly brushed the wood chips from the paper and continued reading.  He then mounted his horse like nothing happened.

Others saw this and were amazed at his composure when danger was all around.   A Captain in his command asked him how he could be so calm.   Jackson’s response was to the heart of the matter.  If you’re living in fear, if people are bigger to you than God is, I pray that you’ll take to heart Jackson’s words, because they are true, Biblical, and reliable. 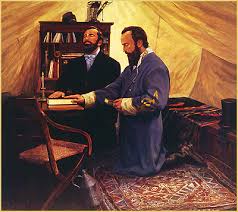 Jackson answered:  “Captain, my religious belief teaches me to feel as safe in battle as in bed. God has fixed the time for my death. I do not concern myself about that, but to be always ready, no matter when it may overtake me....That is the way all men should live, and then all would be equally brave.”

Donate to our ministry

News And Advance article after Commemoration of 155th Battle of Lynchburg