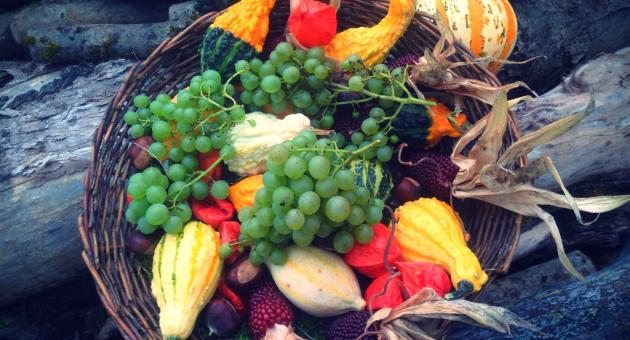 A HISTORY OF THANKSGIVING

Psalm 26:7 (KJV), “That I may publish with the voice of thanksgiving, and tell of all thy wondrous works.”

Psalm 95:2 (KJV), “Let us come before his presence with thanksgiving, and make a joyful noise unto him with psalms.”

Psalm 100:4 (KJV), “Enter into his gates with thanksgiving, and into his courts with praise: be thankful unto him, and bless his name.”

There are multiple stories that we associate with the origins ofThanksgiving in the United States. The most popular version tells of a thanksgiving feast in 1621 involving Native Americans and Pilgrims after the Pilgrims’ first successful harvest. At that feast, the Native Americas who shared in the feast outnumbered the Pilgrims almost two to one becauseonly half of the original group of Pilgrims had survived that first year in the New World.

We might also associate our Thanksgiving holiday with the proclamation for a day of thanksgiving issued by the Continental Congress after the Colonial victory over the British at Saratoga in 1777. And of course, there is Abraham Lincoln’s proclamation, during the Civil War, for a national Thanksgiving Day to be held the final Thursday of November.

What unites these different accounts of the “first” Thanksgiving in the United States is that each proclamation or celebration of thanks took place in a period of hardship and suffering. The pilgrims had buried half their community; the colonists had been losing to the British; the Civil War was literally brother against brother. We have a history in the United Statesof marking days for the giving of thanks to God because we had survived through a difficult time.

Some of the thanksgiving psalms in the Old Testament also give God thanks on the occasion of survival:

The Psalmist in Psalm 30 exalts God who, “I will extol thee, O LORD; for thou hast lifted me up, and hast not made my foes to rejoice over me. 2 O LORD my God, I cried unto thee, and thou hast healed me. 3 O LORD, thou hast brought up my soul from the grave: thou hast kept me alive, that I should not go down to the pit.”

In Psalm 34, the Lord is praised for delivering the Psalmist “from all my fears” and for saving the poor “out of all his troubles.”

Psalm 40 praises God who “…brought me up also out of an horrible pit, out of the miry clay,” In Psalm 66, “… we went through fire and through water: but thou broughtest us out into a wealthy place.”

Psalm 138 says “Though I walk in the midst of trouble, thou wilt revive me:…” The people of the Psalms are a people who survive because of God. To give God thanks after or even during our troubles is a biblical tradition.

We are all survivors at some level, though some have certainly had more than their fair share of troubles. Thanksgiving for survival recognizes that we have not made it this far on our own, by our strength or wits alone. There are simply too many factors over which we have no control. By

declaring, publicly and communally, that we are grateful to God for our survival we also, like the Psalmists, acknowledge our continued dependence on Him. We thank God out of our abundance but also out of our need.

This year, as much as any year in our history, Christians in the United States must remember that God is the One upon whom we depend. We have survived, and we will survive, by the grace of God. We give God thanks for making it to today; our trust is in God for tomorrow.

Thanks be to God!

Donate to our ministry

News And Advance article after Commemoration of 155th Battle of Lynchburg